Since 1961, the Ecole Nationale Supérieure de Statistique et d’Economie Appliquée (ENSEA) of Abidjan has trained more than 4000 graduates from 27 African countries and Haiti. For the celebration of its sixtieth anniversary, several scientific and festive activities are organized since May 2021.

A total of 60 people consisting of doctoral students and young researchers from various institutions from several African and non-African countries took part both online and face to face in the 2021 edition of the African Summer School, “a great first in Africa”, according to the director of ENSEA, Hugues Kouadio. 14 training sessions and a Marschak conference on the theme: “On the econometrics of subjective probability distributions: modelling beliefs about future income” were held at ASSE 2021.

This Summer School aims to promote the culture of economic analysis based on state-of-the-art quantitative methods based on statistical and econometric theories.

“I invite you to build a community of practice from this training and to share the knowledge you will have acquired in your respective research centres and communities,” said the director of ENSEA.

As for the Africa Meeting of the Econometric Society, more than 320 participants from all over the world took part in 158 parallel sessions for the presentation of scientific papers. The meeting culminated in a panel discussion on “Improving Pre-Secondary Education in Africa: Key Challenges and Solutions for Human Capital Development”. This panel, rich both in terms of the quality of the panellists and the theme addressed, saw the participation of the Minister of Technical Education, Vocational Training and Apprenticeship and the Deputy Chief of Staff of the Ministry of National Education and Literacy, representing Mrs. Mariatou KONE, alongside Mr. Gilles Fagninou, Secretary of the Executive Board of UNICEF, and academics such as Prof. Mbiti Isaac, from Virginia University (USA) and Prof. Yaw Nyarko from New York University, for moderation.

This 2021 edition in Côte d’Ivoire was an opportunity to bring together leading economists to discuss issues related to development, education and human capital that correspond to political debates in many African countries, including our own.

It must be said that AFES 2021, which witnessed the participation of renowned researchers such as the 2000 Nobel Prize winner in Economics, the second most influential economist in the world, le Professeur James Heckman,  Manuel Arellano (CEMFI, Madrid), Lisa Cook (Michigan State University), Pascaline Dupas (Stanford University), Kirabo Jackson (Northwestern University), Yaw Nyarko (New York University). Pinelopi Goldberg (Yale University), current President of the Econometric Society, kept all its promises and was well attended by researchers and academics, but also by the quality of the keynote addresses in the field of econometrics. It is part of the scientific activities initiated by the Director of ENSEA, Dr. Hugues KOUADIO, on the occasion of the 60th anniversary of the institution. 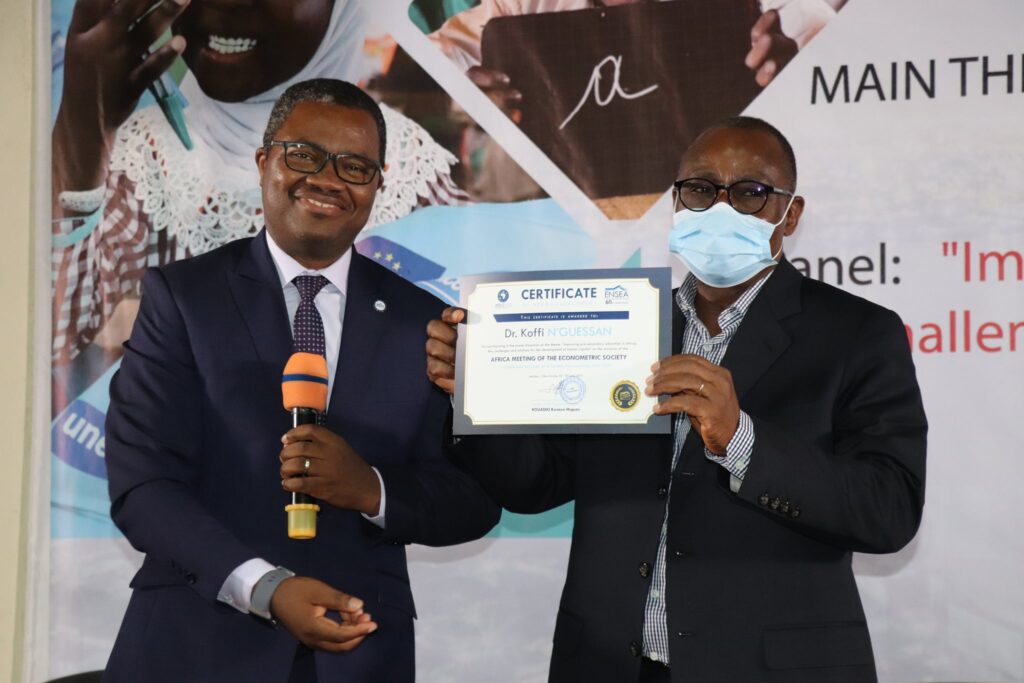 A certificate was awarded to each participant either for participation or for presenting a scientific paper in the 41 parallel sessions. The best paper award was won by Ramaele Moshoeshoe from the University of Lesotho with his paper: Long Term Effects of Free Primary Education on Educational Achievement: Evidence from Lesotho. He won a research stay in the research laboratory of the ‘‘Annals of economics and statistics’’ journal.

As part of strengthening research at the National School of Statistics and Applied Economics (Ecole Nationale Supérieure de Statistique et d’Economie Appliquée d’Abidjan, ENSEA) Cote d’Ivoire, a call for Applications in its PhD Programmes have been issued. Programmes offered are:

Application requirements include the following;

Applications containing all certified documents should be sent via email: ecoledoctorale@ensea.edu.ci  with “Application for the Recruitment of Doctoral Candidates ” as the subject. Please note that any incomplete application will be rejected and applications from non-French speakers and women are strongly encouraged.