The West African Centre for Crop Improvement (WACCI), one of the Centres under the African Centres of Excellence (ACE) Project hosted by the University of Ghana on August 24, 2018 commissioned its new multi-purpose office. The edifice was constructed with funds from the World Bank through the ACE Project.

The building was officially inaugurated by the Minister of Finance Mr. Ken Ofori-Attah and the Vice Chancellor of the University of Ghana Professor Ebenezer Oduro Owusu. 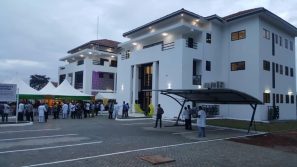 In his address, the Mr. Ken Ofori-Attah commended WACCI for its efforts towards transforming agriculture in Ghana. He noted that, the Centre’s contribution of agriculture to the Ghanaian economy could not be underestimated hence “makes it heart-warming to see this multipurpose building being commissioned”

Also present was the World Bank Country Manager for Ghana, Dr. Henry Kerali, who also applauded WACCI for a good job done. He said, “We are very proud to be associated with this Project. The foremost Centre in Post graduate training and research in Africa.” He also highlighted some major achievements of ACE Project saying, 6500 MSc and 1600 PhD graduates with 25% regional representations as well as 17000 short term courses. He also hinged on International and national accreditations received by the ACEs and external revenue generated to ensure the sustainability of the Project.

He further commended WACCI for its singular success stating, International Accreditation of the Centre’s programmes, its enormous publications and partnerships with other institutions and corporate bodies. He urged the Centre to implement policies and programmes to attract more regional students and female students

Speaking at the event, Miss Nodumo Dhlamini who led the AAU team on behalf of the Secretary General noted that, “the African Centres of Excellence Project places emphasis on results and the commissioning of the West Africa Centre for Crop Improvement Multipurpose Building is one of the key results of the ACE project being implemented by WACCI.” As the Regional Facilitation Unit (RFU) for the Project, the Association of African Universities (AAU) commended the efforts of the government of Ghana and the World Bank as well as AAU’s immense support to the Project. 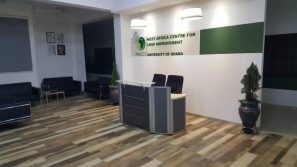 The West African Centre for Crop Improvement is one of the twenty- two Centres of Excellence under the World Bank funded ACE Project. The Centre seeks to address the challenges of the agricultural sector in Africa, with a further aim of improving the socio-economic growth of the continent. Since its inception in 2007, WACCI has grown to become the largest PhD warding Center in Plant breeding in Africa with 66 PhD graduates.

Other dignitaries present was the Deputy Minister of Agriculture in Ghana Dr Sagre Bambang, World Bank Ghana representative for the ACE Project Mrs. Eunice Ackwerh as well as stakeholders of the Academic Community, students and well wishers.